‘Aha’i ‘Olelo Ola has been interviewing many native Hawaiian individuals recently and their accomplishments in relation to the Hawaiian language and culture. Their project is called “11 for 2011” in which they speak with ambitious members of the native Hawaiian community and show they talent and dreams for the future.

One of my favorite individuals to listen to was Ezekiel Lau who is a senior at Kamehameha Schools and talked about his passion as a surfer and his plans about making it to the top of the junior surfing world. To learn more about Lau here is his website http://www.ezekiellau.com/

Another interesting story is about a young native of Hawaii, Kealoha HawaiiSlam as he likes to call himself. Kealoha shares his passion with slam poetry, as he believes that it is the perfect combination of thinking, writing, and theater. What I found interesting about Kealoha is that he graduated from the Massachussets Institute of Technology with a nuclear engineering degree but now is devoting his time to slam poetry because it’s his passion.

I also enjoyed ‘Aha’i ‘Olelo Ola’s story on Ka’iulani Murphy who is an educator for the Polynesian Voyaging Society.  Murphy talks about her experiences on one of Hawaii’s famous voyages, Hokule’a and her future plans in relation to voyaging.

Another interesting story that I enjoyed is on Kamu Kapoi, a local boy born in Waianae, O’ahu who works for the Makaha Studios  Hawaii’s young digital storyteller media services business and is also captain of Wa’a E ALA – Kekoa O Wai’anae. He shares his adventures and love for film and voyaging. 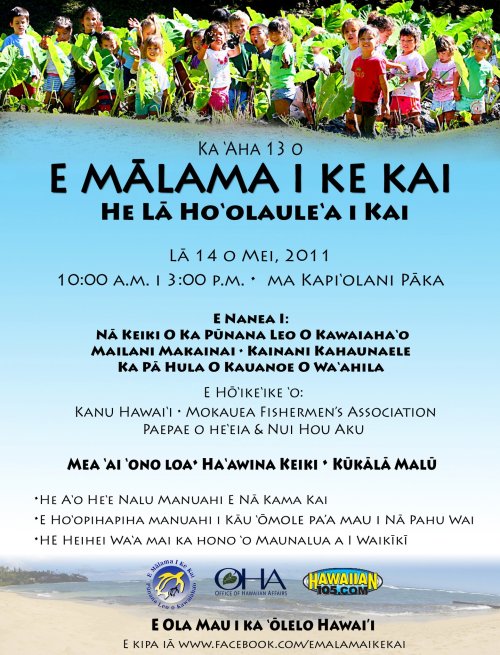 This year Punana Leo o Kawaiaha’o will be holding their annual “E Malama I ke Kai Awareness Fundraiser on Saturday May 14th, from 10am to 3pm at Kapi’olani Park Bandstand, Honolulu, HI.

Punana Leo o Kawaiaha’o has fostered a unique connection to the ocean through its teachers who engage their students in ocean awareness because they themselves are great watermen and women. Punana Leo o Kawaiaha’o is trying to obtain a more sustainable learning community through their curriculum, making ocean awareness a must because the ocean is an important part of the Hawaiian culture.

Having attended this event in the past I believe that it is a great way to get the community involved in learning about the local ocean conservation as well as perpetuating the Hawaiian language and culture with all the art exhibits and activities.

19th Annual Celebration of the Arts 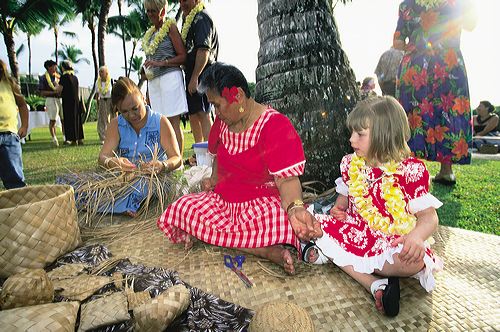 The Annual Celebration of the Arts is an event that happens every year bringing Hawaii’s finest artisans, educators, cultural practitioners, speakers, and entertainers together for the Hawai’i community. Throughout this weekend from April 22-24 the Ritz-Carlton Hotel in Kapalua, Maui is hosting the event.

This year’s theme for the celebration is , “E na Aumakua,” which is in honor of our ancestors. Clifford Nae’ole who is the cultural advisor and event chair said that this years theme, “Embraces the call to our ancestors and all things natural.”

The event includes a full schedule of cultural panels, films, hands-on art, demonstrations, music and dance. According to the Hawaii Tourism Association this event is a past recipient of the “Keep it Hawai’i Kahili Award” and was rated as the number one cultural event by the Hawai’i Modern Luxury Magazine.

The event opens with traditional ceremonies at sunrise on Friday, April 22 and concludes with a Celebration Lu’au and Show on Saturday night, April 23, followed by an after-hours party at the hotel lobby.  There will also be an Easter Brunch and Easter Egg Hunt on the Plantation Lawn on Sunday, April 24th.

Most of the events try to incorporate earth day in their activities along with the theme which is honoring our ancestors. I believe that this is a great way to get the community involved with learning cultural practices as well as the Hawaiian language through a series of fun events.

Taken from the 2010 Annual Celebration of the Arts:

Next week from April 24th through the 30th the 47th Annual Merrie Monarch Hula Festival is coming back to Hilo, Hawai’i again. I’m sure everyone in Hawai’i is familiar with the Merrie Monarch Festival but if you aren’t it is week-long cultural festival that honors King David Kalakaua.

Kalakaua was credited with restoring many Hawaiian cultural traditions during his reign, including the Hula (Hawaiian dance). The Merrie Monarch is the biggest Hula competition in the world.

Many Halau Hula (Hula Groups) who attend the competition come from all over the world including the U.S. mainland, Japan, and other Polynesian countries such as Aotearoa (New Zealand), Tahiti, Samoa, Tonga, etc.

Besides the Hula competition itself there are craft fairs, art shows, hula shows, and a grand parade through Hilo town. 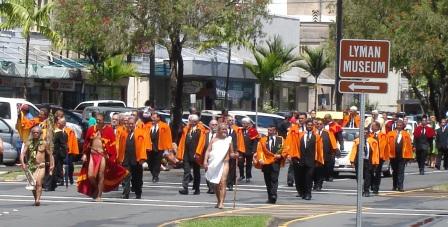 My favorite competition to watch every year is the Miss Aloha Hula competition because it shows individual talent amongst the best women dancers. Last year my friend Kapua Desa got second place for Miss Aloha Hula and I would like to share her amazing Hula Kahiko performance.

Here is sneak-preview of the Merrie Monarch Festival competitors as they prepare themselves. Brought to you by  ‘Ahai ‘Olelo Ola